Honoring those lost: Corvallis, Albany hold memorials for the unhoused 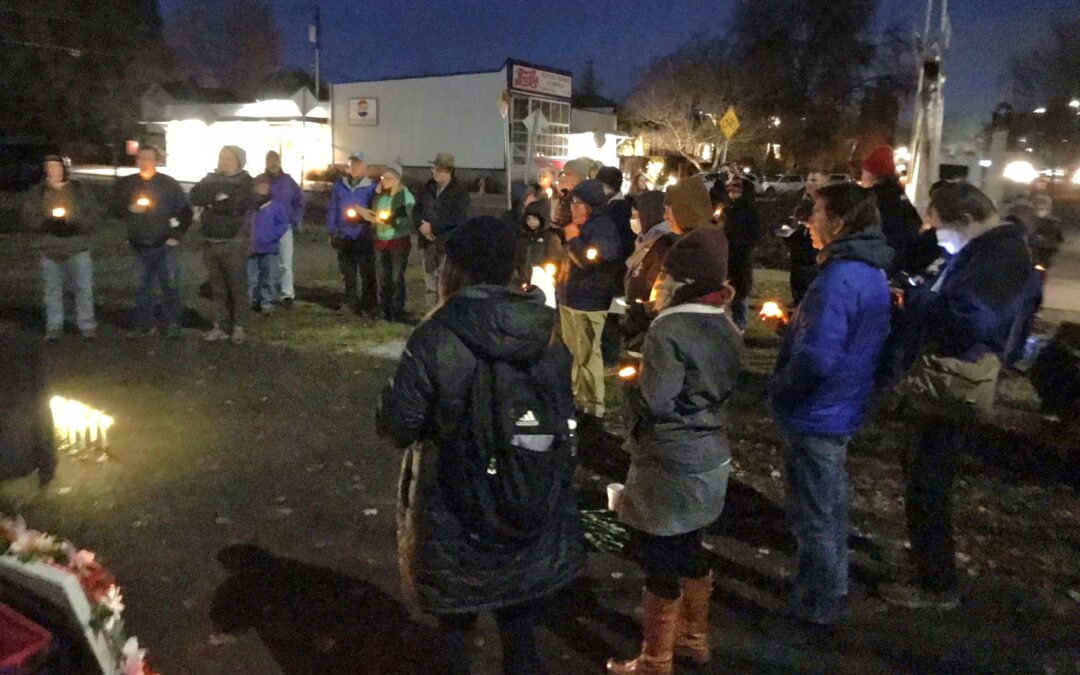 Under an elevated highway, near a skate park in Corvallis, a trio of ministers asked a crowd to look skyward Dec. 21 and then remember those who are already in the ground.
Across the river in Albany, at the same time, friends clutched each other in the darkness of the frigid winter night and remembered late loved ones. Pale light from nearly two dozen memorial candles caught on their tear-streaked faces and hands.
An average 10 to 100 people died that day across the U.S. who were without housing or shelter, depending on who is counting. Numbers are vague and deaths likely undercounted.
Crowds in Albany and Corvallis listened to the names of brothers, sisters, clients and patients who are missed by grieving loved ones, the ministers said — and missed by the social safety net that has failed to keep up with soaring houselessness.
“Being poor should not be a death sentence,” said Rev. Jen Butler.

Solstice
The sun stuck to the horizon that day, the solstice and the first of winter.
It appeared to cross the Willamette and Marys rivers’ confluence looking south from downtown Corvallis, then disappear beyond the merger of highways 20 and 34 just nine hours later.

That night was clear enough and icy enough to feel like the Earth’s thin blanket of ozone had given way to the cold of space.
On the longest night of the year, memorials in Corvallis and Albany honored those who could not so easily shelter from the cold.
“I was also homeless, and these people are family,” said Troy Hopper, an employee at Albany Helping Hands, the local homeless shelter.
Dozens gathered in Albany outside 2nd Chance Shelter to pay their respects, pray, sing and listen to a list of names of those who had passed away.

That list was longer this year. With 19 names, it is the longest since the start of the Annual Homeless Persons Memorial Service in 2009, said Community Services Consortium HEART chair, Dina Eldridge.
She tried to make sense of it: There may have been more names this year, she said, because of increased efforts to record the deaths of unhoused people, looking more broadly at other cities in Linn County, Eldridge said.
Twenty candles were lit to represent the 19 on the list who had passed. And one candle to represent those who were not named or whose deaths were unknown.

Survival
Corvallis’ outreach workers, the folks who minister and render medical aid and provide food to people in the city who are unhoused, lit three candles.

They named 60 who have died since 2020. It was the city’s first Longest Night Memorial.
The event is designed to direct communities’ attention to their most vulnerable and is heralded by the National Alliance to End Homelessness as an effort to humanize people alienated by city planning and policy that criminalizes their survival.
Frankly, Butler said, it felt long overdue.
People who are unhoused don’t just die, but disappear, homeless advocate Hezekiah Franklin said.

“People just don’t care if someone dies who doesn’t pay taxes,” he said. “They’re subhuman, like Black people were one-eighth of a human.”
Franklin is a frontline community wellness worker with Corvallis Daytime Drop-in Center.
He is an ex-board member of the nonprofit organization that connects people to caseworkers, along with health care, housing and whatever else they need to get off the streets.
But before that, he said, Franklin was homeless after growing up in predominantly Black neighborhoods in Michigan.

From age 17 to 39, people around him would die of illness or violence, or in a roadway after they were hit by cars and the justice system held no one accountable, he said.
Franklin said he’s not even sure what happens to the bodies of unhoused folks after the coroner hauls them away.
“They’re begging to get off the streets,” he said. “They’re begging for support.”
The unhoused are much more likely to experience disease, mental health crisis, addiction, exposure to extreme cold and hot weather than others in their community.

They’re also 8.6 to 16.1 times more likely to die, according to a 2022 article in Journal of Health Care for the Poor and Underserved, at an age far below that of their housed neighbors.
An estimated 600 live without housing or shelter across a 16-mile swath of the mid-Willamette Valley, 300 in each Albany and Corvallis.
Franklin believes more shelter would alleviate those numbers, he said. To achieve that, however, would take effective political leadership and an electorate that doesn’t see people who are unhoused as a single entity, one discussed in city hall and the statehouse as a problem.
“The system that broke people is not going to make them whole,” Franklin said in Corvallis. “We aren’t going to fix these modern problems with these old-ass solutions.”

Grief
Albany grievers named their lost: Stephen Leslie Haynes, James “Jammers” Robert Warrington, Doug Arnold, Lisa Renae Erikson, Stanley Kunawa Pomaikai, Lisa Palmer, Carla Miller, Robert Halfacre, Stephanie Lee Bishop, Conan Lee Dehut, Rufus Furdig, Paul Clark, Daniel Eugene Partridge, Kacy Mitchell, Jeffrey Alan Pearce, Itasca “Tessa” Hinton, Kimberly Ann Barnes, David Ray Whiteaker, and Obed Pizarro.
More than 30% were 40 or younger, Eldridge said. Some were veterans, some were seniors, some their ages unknown. But all of them had experienced homelessness.
And they were not going to be forgotten.
“Every time you say a name or tell a story, you continue that light,” Wes Sedlacek, chaplain for Samaritan Health, said.
Struggling to fight back tears, the former director of Helping Hands, Albany’s Emma Deane, raised the list and called out all the names she knew. She made a point to tell the crowd a personal anecdote about each one.

“Doug was funny and a hard worker and a good teacher. Lisa was a free spirit who loved to dance, and Carla was a mama bear,” she said.
She knew eight of the names on the list, she said in an interview after the service.
“We get so caught up in our lives that we don’t see people,” Albany Mayor Alex Johnson II said.
He shared his own story about his brother, who was experiencing homelessness and died in 2016.

“When you see someone in crisis, tell someone,” he said. “Nobody saw my brother.”
After the crowd had dispersed, Deane crossed the street to attend to an unhoused person lying on the sidewalk.
“It’s a huge concern for individuals not in shelter to stay dry and warm and to just be able to make it through the night,” she said.
Deane checked the person’s vitals and retrieved a blanket from her mother’s car to lay over the individual.
“They don’t feel seen,” she said. “It’s important to see them as human beings, and an event like this allows people to see them.”
In Corvallis, the crowd sang “Silent Night.”

Butler encouraged the crowd to take hold of whatever spirituality would help them memorialize the 60 or so who have died on the streets or without shelter in Corvallis since 2020.
“Pray to the god of your own understanding,” Butler said.
The ministers finished ministering and the grief dissipated like frozen breath with the crowd. A few dozen scattered, their faces sparkling with tears and hands thrust into puffy nylon jackets, taking the candlelight and singing with them.
Laughter rose in sporadic shouts from people silhouetted by a warming fire near a cement skatepark bowl.
It was 7 p.m. and the air temperature measured 33 degrees.
The National Weather Service issued a warning as an ice storm potential bore down on the mid-Willamette Valley, with the thermometer bottoming out at 24.

Jesse Ford, a chaplain with Corvallis Housing First and one of those who ministered to Corvallis’ Longest Night event, said she knew several of the dead named in the list of 60.
“My heart is breaking,” she said.
Ford couldn’t begin to guess whether city political and civic leaders who attended also took the names to heart, she said.
“It’s right to remember,” she said. “It’s right to acknowledge this — not just let it roll on like the river under a bridge.”